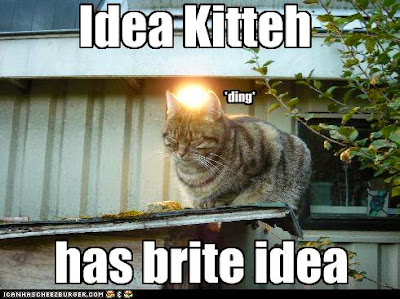 I had an epiphany regarding my NaNo novel today. I may not have mentioned this before, but I'm working from an old idea. I had to delve deep into the old story trunk for this one. It's about ten years old and though I originally started out strong with it, the story kind of petered out because I only had a vague idea where it was going.

But it piqued my attention when I was searching for a NaNo idea. I had a lot of notes and a long prologue. I was good to go. First thing was to scrap the cheesy prologue. It concerned the two main characters saying goodbye as young teens, pledging their undying love to each other. Gag me! I may salvage some of it later as a dream sequence, but that'll be as good as it gets.

Anyway, in the original concept there was only a hint of a Super Secret Society (SSS), so one of the things I'm doing is fleshing this organization out. It's going to be a driving force behind the suspense of the story.

There was also only a hint of what's really going on, and I'm a little more clear on that as well. But my epiphany was the beginning. I finally figured out how to start it. I knew the grandfather had to die, but I didn't know how or under what circumstances. I think in the original concept he just died of a heart attack or something mundane, but I decided if I'm going to start out with his death, it needs to be a good one. So the SSS will have to involved. And it'll happen before he's able to pass on a secret that will become an important plot point.

AND, because this unrevealed secret is so important, there'll have to be clues for my characters to follow, the SSS nipping at their heels.

I love it when a plot comes together! ;-)