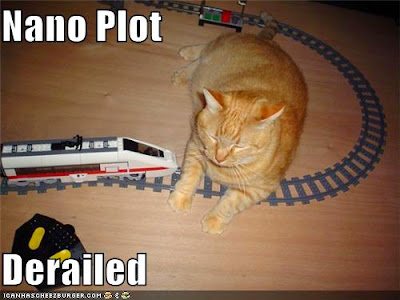 Bless me readers for I have sinned. It's been many days since my last update . . .

Well after a week of struggling I had an awesome weekend and now I'm back to struggling. I'm still on track, but I'm struggling. I sort of know where the story's going, but at the same time I don't. The bad guys are not going to get what they want, but even if I eliminate them, what's to prevent more from coming after my heroes for the same thing? That's the problem with super secret societies. So I may have to rethink my bad guys, or at the very least their goals. But not right now. Right now I have to push forward to get the story done. :-)

So, in the meantime, I thought I'd post an excerpt. About time, eh? In previous years I always posted excerpts, at least once a week. I have no idea why I didn't think of this sooner.

This doesn't really need much set-up. My FMC, Octavia, and her friend Vanessa have driven into town in search of dinner:

They found a diner right on the main street in the form of Miss Patty’s Place. A chalkboard sign on the sidewalk proclaimed that breakfast was served all day and today’s special was all you can eat clam chowder.

“This place is awesome,” Vanessa exclaimed.

It was like stepping back into the fifties. There were high backed booths covered in red vinyl and the round stools along the counter with the same vinyl on their seats. On the walls were photographs: girls in poodle skirts, boys in leather jackets, several hot rods and an autographed picture of James Dean. There was a juke box in one corner and an old fashioned soda machine behind the counter.

They could only stare at the waitress who came out of the back in answer to the summons of the bell that tinkled when they opened the door. She was dressed in an old-fashioned, pink waitress uniform and her blonde hair was upswept in a beehive hairdo. The name tag pinned to her chest proclaimed her to be Patty.

“What’ll it be ladies?” she asked as they slid onto stools at the counter.

“You’re way too young to be the Miss Patty,” Octavia said.

Patty smiled good naturedly, “Actually, I’m the third Miss Patty. The original was my grandmother. She only comes in about once a week, more to visit with her friends than to check up on me.”

“This is such a great idea for a diner!”

“Actually,” Patty leaned on the counter to talk, “All this stuff is original. My grandma started it back in the fifties and we just never got around to changing anything. People around here seem to like it, even the kids.”

“So,” she asked, pulling a pencil from behind her ear and an order book from her pocket. “Would you like to start with some coffee?”

“I would love a cup of coffee,” Vanessa told her. “And some French toast with bacon to go with it.”

“Sounds good to me,” Octavia seconded. “I’ll have the same.”

“Great! I’ll be right back with your coffee.”

As she bustled away into the back Vanessa twirled around on her stool. “This is great, I feel like a kid again.”

“The fifties were just a little before your time,” Octavia reminded her. “But there is something oddly familiar about this place.”

The bell tinkled over the door and an older, plumper version of Patty entered the diner.

“Well hello there, I don’t think I’ve seen you here before. Are you first timers at Miss Patty’s?” Mystified, they nodded their heads.

She reached into the pocket of her uniform and pulled out a pair of cards. “Here you go, a free fountain treat on your next visit, compliments of Miss Patty. Well, one of them anyway.”

At that precise moment, the first Patty returned, in true waitress fashion carrying their entire order. She slid the plates in front of them and nodded at the older woman.

“I see you’ve met my mother, Miss Patty the second.”

“And there’ll never be a Miss Patty the fourth if you and that husband of your don’t get cracking,” she replied.

Patty rolled her eyes as if this was an old argument.

“We were admiring your diner,” Vanessa said.

“Why thank you,” Patty the elder said. She peered closer at Octavia. “Do I know you from somewhere?”

“I don’t think so,” Octavia said. “Although I was just wondering if it’s possible that I’ve been here before myself, maybe as a child. I’ve had an accident with my memory and there are . . . gaps.”

The elder Patty took a seat beside her and looked her over carefully. “You do look familiar . . . You have the look of a Griffin about you.”

“That was my grandfather’s name. Samuel Griffin.”

“Of course, your grandfather used to bring you here when you were a little girl. Are you just visiting or are you back to stay?”

Octavia hesitated. “I’m not sure what my plans are yet. I’ll be staying for awhile, anyway.”

“Well that’s good to hear,” the elder Patty said, getting to her feet. “Now don’t you forget to come back for your free fountain treat.”